A 56 year old woman came to our OPD with complaints of abdominal discomfort and bloating for last 3 months. She had attended 3 previous hospitals where various investigations were done and the diagnosis of a large pelvic lump was made. We repeated the ultrasound and found out a large ovarian lump of 20cm. CECT whole abdomen was advised and the reports showed thick walled unilocular left ovarian cyst. She had undergone abdominal hysterectomy 8 years earlier due to uterine fibroids

Her CA125 came out as 56. RMI was calculated and the decision for surgery was taken. She was operated by our able team and we took out a huge ovarian lump about 22cm in size. There were dense adhesions of the gut with the vault and bilateral ovaries. The entire anatomy was restored and right sided ovary was also taken out. The post operative period was uneventful and the woman went back home 4 days after surgery. She came back for follow up after 4 weeks with HPE report which showed serous cystadenona without any malignant change.

A 45 year old lady walked in our emergency with complaints of severe bleeding per vagina. She was bleeding for 4 to 5 days but it became very severe that night and she felt dizzy. At the emergency she was attended immediately and was found to be pale with a blood pressure of 90/60mm hg. I rushed in an hour and started her workup and stabilized her. Her haemoglobin came out to be 6gm% and ultrasound revealed multiple uterine tumours(6 in no.) , largest one 7cm. 3 units of blood given and haemoglobin repeated after 72 hours, when it came to be 11gm%. She underwent a TOTAL LAPAROSCOPIC HYSTERECTOMY AND BILATERAL SALPINGOOPHORECTOMY. The operative procedure was completed successfully and the post operative period was uneventful. The lady went back home 3 days after surgery as she was scarless and painfree.

A 17 year old girl presented to the OPD with complaints of gradually increasing pain abdomen during menstruation for last 4 years. Several doctors were consulted but ultrasound revealed no obvious abnormality and she was put on painkillers. She developed gastritis with long term use of pain killers and came to us in a disturbed condition. We suspected endometriosis a performed a blood test CA125 which came to be 738. We had a medical board meeting and decided to proceed for a diagnostic laparoscopy( KEY HOLE SURGERY). The surgery revealed innumerable vesicles over the uterus, bilateral tubes and ovaries suggesting Grade 4 pelvic endometriosis. The vesicles were cauterized and adhesiolysis done to restore the anatomy. Postoperatively the patient was put on Dienogest 2mg for 6 months. At the end of 1 month the CA125 was 165, at the end of 3months it was 52 and at end of 6 months it came down to 37. She is currently pain free and happy. 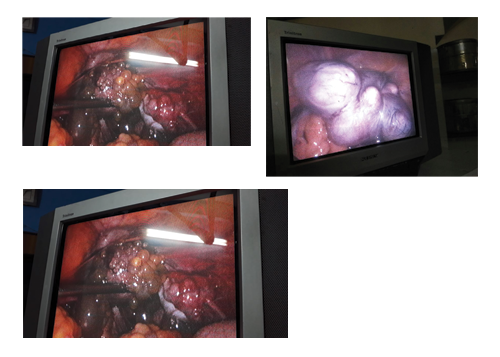 A 52 year old patient came all the way from Bangladesh to Woodland hospital at my clinic.. she was in very much distress... in Bangladesh she was posted for a surgery to remove the uterus along with the ovaries because of multiple uterine fibroids... but unfortunately the operation was just open and shut because of dense adhesions and a frozen pelvis the uterus couldn't be reached upon... so she had to travel all the way from bangladesh to India to get proper treatment... we posted her for surgery and our team of doctors which included general surgeon and me opened the abdomen to find out a plastered pelvis... after much careful dissection we could reach the uterus... we removed the uterus and ovaries completely... she had an uneventful postoperative period and went back to Bangladesh after 2 weeks very happily